SHIPS AND THEIR MODELS 103

When purchasing a ship model, it should be built to scale.  This means that the modeler has attempted to make a model that is a proportionally correct replica of the actual ship in every detail. It’s almost impossible to build a model that is an exact replica of the ship it portrays, but a good modeler can get close. The closer the model is to being an exact scale replica, the more beautiful the model will appear.

There are several ways to understand this.  You can describe this scale by saying that 1/4″=1′. Another way is to say that 1′=48′. Notice that the measurement of the model is given first, followed by it’s equivalent measurement on the actual ship. 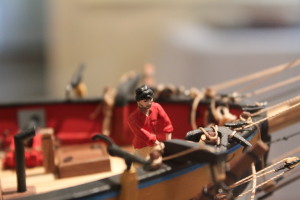 In determining whether a ship model is built to scale, it helps to visualize how large an object on the model should be by comparing it to the height of an average modern man. For example, using 6 feet as the benchmark,  a 1/48 scale replica of a modern man would be 1.5″ tall. By visualizing a 1.5″ tall man on the deck of a 1/48 scale model, you can quickly tell whether the details of a model are in scale. As I build my models, I use this method so that I never repeat a mistake I made on my first model. After proudly showing my work to an engineer friend, he used this method to quickly demonstrate to me that the steps on the ship model were the equivalent of being 2 feet high! I never made the mistake again.

In deciding on the right model, you also need to ask yourself, “Where and how will the model be displayed?” Only you can decide whether the model will be in your home or in an office, and whether it will be the centerpiece of your room, sitting on a mantle, or on a table off to the side.

If you want your model to be the centerpiece of a room or an office, think about getting a large model, at least three feet long. It is my personal bias that models of 19th and 20th century ships, particularly frigates, make the best large models, especially when they are displayed with sails. I envision a 5 foot waterline model of the Bonhomme Richard, with sails set, as the centerpiece of a mansion, restaurant, or large office lobby.

Models for an average size home, especially when placed on a mantlepiece, should be imposing but smaller, perhaps two to three feet long. This size also looks wonderful on a table, enclosed in a brass or wooden case. In my opinion, ships of exploration, Spanish Galleons, British ships-of-the-line, and American frigates all look great at this size. I personally prefer mantle and tabletop models without sails, except when the ship is a schooner.

Something for a shelf or bookcase? You can go really small, one to two feet, with or without sails. As long as the modeler maintains the same attention to detail, small models can be as beautiful as their larger counterparts.

The best advice I can give you is to think of your model as a work of art, then proudly display it in a place where you can enjoy looking at it every day.