I have been repairing a charming model of a five-masted ship that is built in a rustic style, with metal sails. Based on personal history, the owner estimates that it is about 100 years old.  I can’t confirm that, although the dust probably took decades to accumulate. 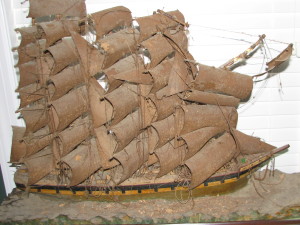 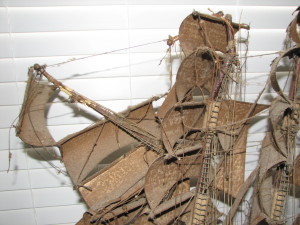 It appears that someone had tried to repair previous damage to the masts with globs of epoxy. Then, recently, something traumatic happened to the model. The masts were all re-broken, many sails were ripped off, and much of the rigging was torn. All of this, the good and the bad, was covered in a quarter of an inch of gooey dust. Click on the pictures for an enlarged view of how sadly this model had been treated. 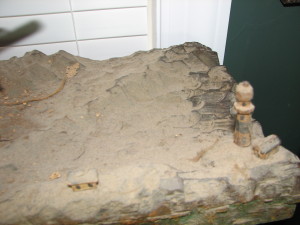 I had to repair the recent damage, but I also had to get rid of the problems created by years of neglect and the previous attempts at repair. Knowing that I should not add to the damage, I painstakingly brushed off the dust, then used Q-tips to get the stubborn grit off.  I did not attempt to clean the sails; that would have ruined them. But the old epoxy had to go, so I scraped and sanded it off. Then I glued the masts back and began the process of re-attaching the sails. 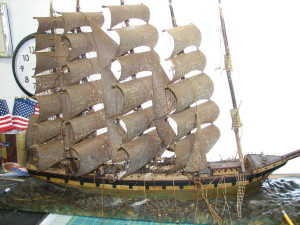 This is what the model looked like about half-way through the process. The old rigging was a problem, since it fell apart at the slightest touch.  I found myself re-attaching the lines with thin wire hidden in the strands.  In some cases, I had to replace rigging, which involved finding similar thread, then staining it to replicate the right color.

Several times I was tempted to touch up parts of the hull and deck with paint, but I stayed true to my conviction that I should do no further harm to this precious model. Perhaps there will be a future restorer, who will thank me for my restraint.

It’s May 15, 2014 and the reparation is finished. The model is really beautiful, I wish it were mine. 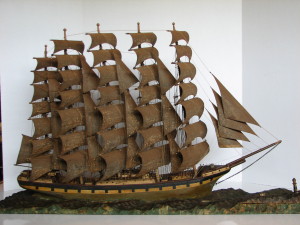 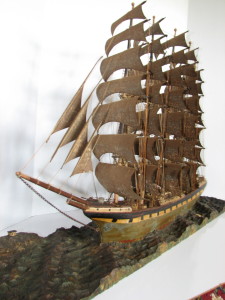 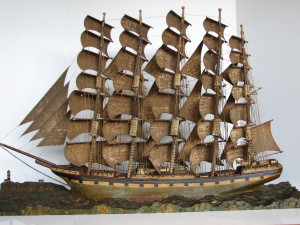