Would you believe that Long Island Sound was the scene of two of the Revolutionary War’s worst shipwrecks?  And that one of these shipwrecks may still have millions of dollars of gold in it?

It’s true.  In 1778, the HMS Hussar, a 28 gun British war ship, was transporting more than £2 million of gold from New York City to the eastern end of Long Island. Just north of Manhattan Island, it was swept onto the rocks of Hell Gate, a notoriously dangerous section of the passage from New York’s East River to the western portion Long Island Sound. Sinking in 16 fathoms of water, the Hussar and its treasure could not be recovered by the British. More than 150 years later, the bottom of Hell Gate was blasted with dynamite to make the passage safer, at the same time ensuring that the Hussar would never be found. 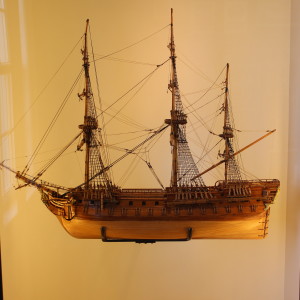 Another disastrous shipwreck occurred in 1781 when the 74-four gun HMS Culloden ran aground near Montauk. The Culloden and two other large British warships were patrolling the waters leading into the Sound when a vicious storm hit. The other two ships were able to navigate to safety, but Culloden’s crew became disoriented and drifted south onto a Montauk beach.  Too battered to be salvaged, most of Culloden’s guns, masts, and rigging were removed, and she was left to rot. The remains of the keel could still be seen as late as the 1990′s off Culloden Point.

The Montauk Lighthouse Museum has an excellent model of the Culloden, while the East Hampton Maritime Museum has a cannon and other artifacts from the Culloden on display. It is well worth a visit to these two museums, especially on a sunny day.  From the top of the lighthouse, you can see clear across to Connecticut and Rhode Island, while the view of the ocean from the second floor of the East Hampton Maritime Museum is spectacular. The displays also drive home the point that our Revolutionary War history is not as remote as it often seems.  It happened here, right where we live, and not so long ago.